This is a really cool currently true story that I am sure will interest you.

Next week, my friend and bandmate is moving out to Vancouver BC with his girlfriend. Myself, and another friend will be driving a truck pulling a u-haul to help them move into their new place. When out there, my friend suggested we drive down to Seattle for the day, its only a 2 hour drive...if that.

Now I don't know if you know this, but Valve games studios is located just outside of the city proper of Seattle. I thought that if I am in the area, however unlikely, I will need to try to get into Valve studios.
There is clearly no tour available to the public, as per their website. But I had an interesting in....

About two years ago, the 3d sound on my sound card was not working properly in the new Orange box version of the source engine. After submitting a support ticket, a lead sound engineer decided to take over this case himself. We corresponded a few times, and he made some changes in the next patch.

Well anyways, I still had his work email in my account, and I contacted him. I told him my story straight up, and that I would love to come down and check out the studios and maybe play and give some feedback from a long time fan.

I expected no reply at all, I thought they probably got this from big fans all too much. I was wrong. He contacted me back today and said he is trying to set something up for next Friday! He said they are currently play testing Portal 2 and asked if I had enough time to play some????!?!?! I said I definitely did, but what I was thinking was "I will live in Seattle and play test your games for free until all my credit cards are maxed out and my pandhandling skills can no longer provide!!"

So anyways I have a pending appointment at Valve games studios next week and the best part is that I will be showing up with the greatest resume my mind can conjur!!!

If you somewhat know a thing or two about me, you know this is a dream come true!!!

Here's hoping you don't get stuck at the border. Just don't let the border guards know you're a huge Valve fan otherwise they'll realize there is a high risk you'll never return!!

So you thinking there's any chance of you getting a real job with them?

But I have done lots of investigating before into what kind of people are hired in quality assurance tester positions. Bioware even specified quality assurance as an entry level position. I have tonnes of game experience , a Psychology major, passion, and the x factor is that I am incredibly charismatic in person. I have a strategy planned out. But when it is all said and done, however unlikely, it obviously does not hurt to take a shot!

I am incredibly nervous right now since so much stands in between the front door of Valve and myself. A washed out highway, a international border (I hear its a really busy one there too), and express passport supposed to arrive the day before I leave.......and 27 hours driving. I am very worried.

and have fun with your visit!

So its on for Friday. I get to take part in their play test of Portal 2. Four hours with it!

I wonder if any will be spent in the co-op parts?

Awesome! I hope you get there and have a blast... coming away with a job would be amazing. Best of luck to you!

Apparently H-1b work visa reach their allotted amount within a few weeks after release so......

I am just going to enjoy 4 full hours or Portal 2, and hope to make some friends...

Hey Nice for you!

I hope the best for you, a passion is stronger than anything.

I made it there! And its a good story.

Though at the border I told them the truth, and they thought it sounded funny, so they pulled us is. I was so worried that I would not make it in time. Luckily the customs agent that we got hooked up with inside was at least a moderate fan of Valve himself. We were only delayed 15 minutes and were off again.

The scenery in Washington is quite nice I must say. Clearly the inspiration for White forest. Bellevue itself, is an almost eerily pristine downtown! So anyways I arrived at this brown office tower and entered the front door. I could not find Valve on the office listings and was kind of alarmed for a few seconds (there was no evidence Valve was in this building whatsoever) until I remembered suite 500 = floor 5. So I entered the elevator, and when I exited I was greeted with a wall covered in every single magazine cover that a Valve game has ever graced......I knew I was in the right place. I walked down the hall to the front office where a massive engraved sign read "Valve" and there was an actual 4' tall metal Valve. I told the receptionist I was there to see Marc about a playtest. Apparently he was not easy to get a hold of, so I wandered the halls that were not sealed by keycard locks, which was only two.

There was one wall that had every award Valve has won - there were quite a few. There was a large tank figurine along with a Heavy weapons guy figurine as well. There were also lots of cool lithographs and posters on the wall. The office was AMAZING looking!

Eventually Marc came down and took me up to the Portal 2 development area. He sat me down at one of two PC's in the hall and explained how they were currently reorganizing, which explained their location. He then went on to explain how there will be a camera on my face, and a microphone I can talk into as I play (I used the mic only once to say "I did not see that button there"). As the local steam system downloaded the latest version of Portal 2 (which was just completed that morning) we chatted a little. He mentioned how I would be playing the pre-alpha build.

After a few minutes I was greeted by a man named "Serge" who I was told would be playtesting with me today. I was an "external" playtester and he was an "internal" one. I soon found out that they hold a play test every Friday, and no matter who you are or what your position is at Valve, eventually you will be called in as a test subject. I assume that Serge was a programmer, or worked in the Steam department, because not only had he never played Portal.....he was quite a noob!

Anyways the client loaded up, and to my dismay I learned I would not be playing at maximum resolution because of the recording software they use (bummer) - I got used to it though. So Marc let me be, and I got started.

I was really getting into the game and enjoying myself, when I felt a runny nose. After inspecting it by probing it with my pinky finger, I learned it was in fact a bloody nose. This is funny because I am not prone to nose bleeds. I leaned over to Serge and asked him to point me to the bathroom. After attended to my nose bleed, I noticed something funny on my walk back. There was a room with a glass window. On the other side was a 50" screen with my PC screen and my face displayed on it.....along with about 10 guys watching it. I had an audience! I would later learn the majority or the Portal 2 development team was watching me play......and had watched me stick my finger up my nose! I was actually quite amused.

I had never played in front of a live audience before, but it was actually as you might expect. There was a tape delay of 5 seconds so I had to wait for the response of the crowd LOL. If I did a great fling only to fall off into a pit of acid I would set down my mouse, pick up my water bottle and count to 5, after which I would hear a chorus of "ohhhhs", "ahhhhhs" or just laughter. It was quite amusing really. Sometimes it would sound like a PGA tournament when a player misses a put by an inch. I felt like they were rooting for me really, but it was also them rooting for themselves - since every successful puzzle completion indicated their work was on track.

The game itself was really fun. I was not blown away, but that is understandable in a pre-alpha build. Only about 40% of the voice acting was completed, the other 60% was was just subtitled. Only the first 50% of the levels had completed art as well. The second half was all placeholder textures and models. I was able to play a good majority of the game, and experience the major points of the story including a plot twist. I experienced every new element in the game, including some that were not made public at E3.

After 2 hours of play, 1 hour lunch, and 2 hours more play I completed the playtest. After which I was escorted in a very nice meeting room. I was greeted by the entire portal 2 development team (about 15 people), and they all had pads of paper in their hands, and their eyes fixed on me. LOL. I did not know public speaking was part of the deal! Anyways, to sum it up, for the next 30min I had the entire development team hanging on my every word. IT WAS AWESOME! At first I was a little nervous and did not answer the questions and elaborate my thoughts quite as well as I would have liked, but after a little while, and a few jokes to loosen up the crowd, we had a good discussion.

We first talked about general thoughts on the gameplay and story. Then we moved on to discussing each individual new gameplay element. After that we talked about more random things. They had quite a few questions about the story and how well it stuck with me. I had to continually explain how that lack of voice acting, and my focus more on gameplay kind of negated my detailed recognition of the story. Near the end they asked if I played counter-strike. When i gave them they answer they exclaimed "we knew it!......You Can always tell a CS player by how they move the mouse" LOL!

So this is how Valve games are made. With the entire dev team intimately experiencing each playtesters playthrough......really interesting.

Anyways.....for my troubles I made them all line up for a picture with me. The majority attended. 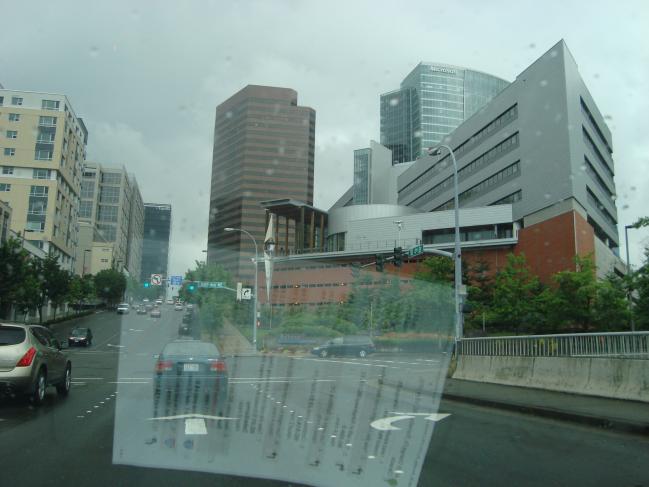 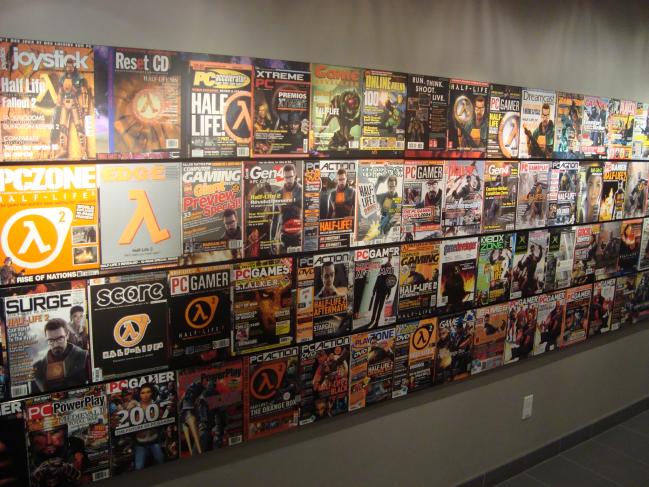 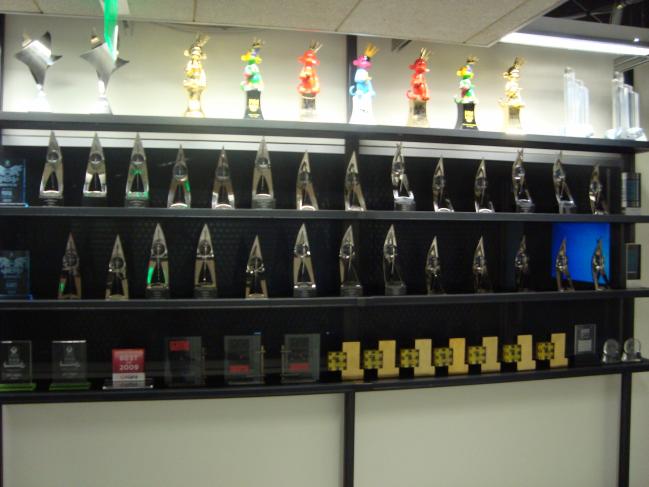 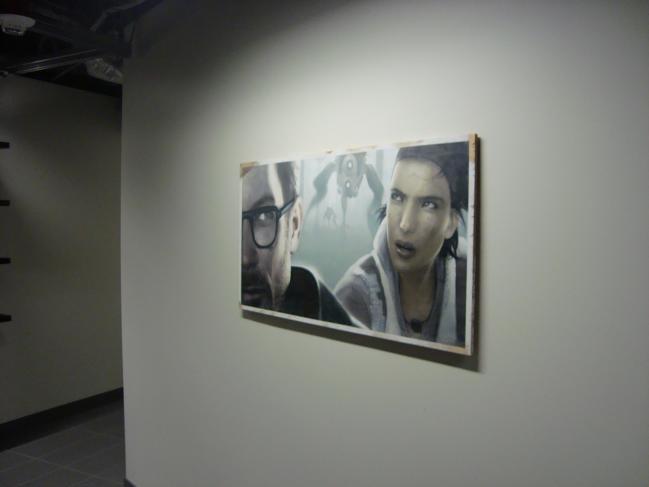 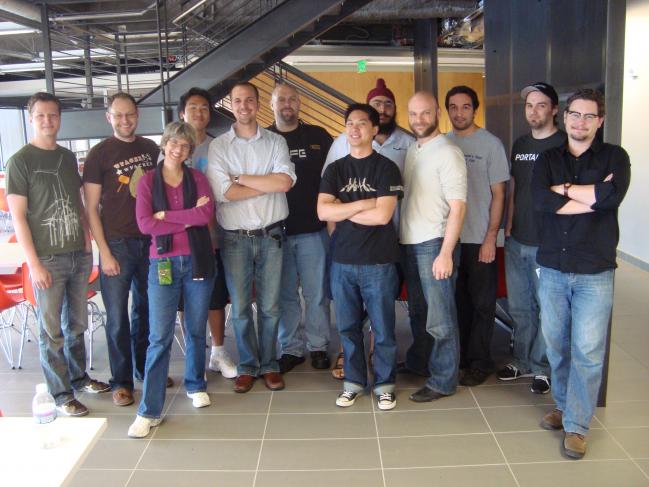 Wow, thats like a dream come true for you! Grats man...

Maybe you can land a job through that?