Philippe Boulle, Game Director for Dawn of War 3, has left Relic. Released in a tweet on Friday he talks about how he is leaving the company after 12 years, which means he survived the purge of THQ, and how he already has a new job to look forward to. We are given no information as to whether he's leaving because he wants to or if he's leaving because he's forced to due to DoW 3... Not doing so well. As in it went from 26k concurrent players down to 500 in a few short months with only a small boost after a 50% off sale. Ouch. 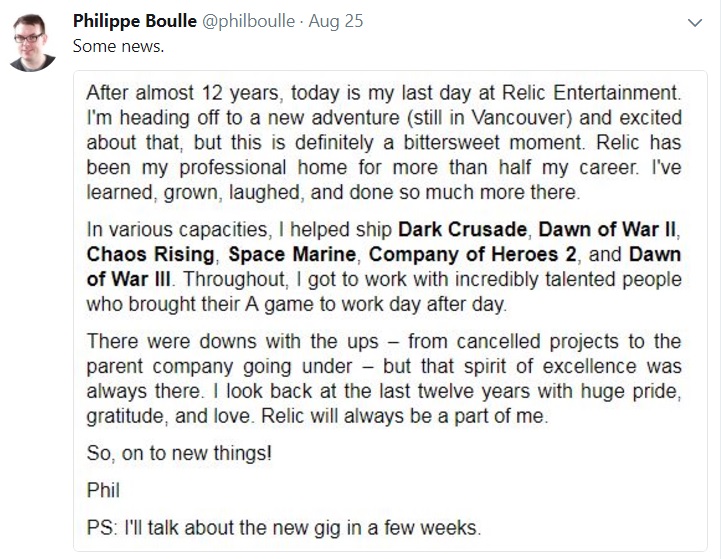 With the Game Director gone it does ask the question of who's taking over for the series. Or if there will be any further development at all for it. There has been no response from Relic yet though they did just announce that they're working on Age of Empires 4. The main team may be working on AoE 4 as that's an entirely new game, but there could be a smaller team still working on DoW 3's expansion. There are many fans wondering what's going to happen so hopefully someone from Relic says something before everyone just thinks that the game will no longer be supported.

No, wonder after DoW is dead:

Sega and Relic have just announced that they wont made any addons for DOW 3.
So DoW 3 is kinda a failure, also because of to less players.