Hi guys I was wondering if anybody else decided to upgrade to Win 10 and had problems with C&C TW?

I'm seeing pink game objects (which I think could be graphic driver issues maybe) and my game is crashing with errors about every 1/2 games!

I updated my AMD graphics driver yesterday (it was a windows 10 driver) and still I get the same issues. Anybody else having this problem?

I didn't have a problems with launching TW on Windows 10.

However i was using Windows Update and some day this updated my GTX660 driver for their own version, as i can see you did it too, right ?

I suggest you to uninstall driver and install again, not via Windows Updatet but rather download it from official AMD website.

Let me know, did you have a some issues with mouse ? I mean, in higher/bugged resolution ? 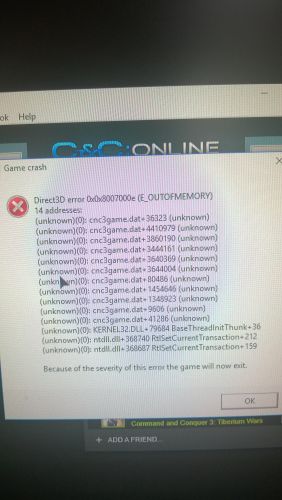 I googled that issue and it appears others have had it before with cnc 3 back years ago.

There is something about that here; http://forums.revora.net/topic/102663-windows-10/. I have no experience of this as yet, so if you find that the suggested solution helps, please would you let us know.

Sometimes i was getting this error, the most often while lauching game or playing. Then i just tried to re-launch game. It's probably an issue with the newest DirectX12.

Get the DX9 installer from Microsoft: http://www.microsoft.com/en-us/download/details.aspx?id=8109

This will extract the needed files, but in the folder you decide to extract them to, you need to run DXSETUP.exe. And do it as admin.

Someone else had pink stuff in KW recently, and that was because his graphics card was rekt.

You idiot, that doesn't in any way help the guy fix his installation.

You idiot, that doesn't in any way help the guy fix his installation.
Just saying its possible and maybe they can ask quesitions.

Anyways I upgraded from windows 7 to windows 10 then reset the computer and I downloaded steam and tiberium wars then cnc-online and it worked, not a problem. Maybe if you didnt do a fresh boot it could have some incompatibility issues.

What you did was link to a video saying it works for you on Windows 10, but you contributed nothing to the solution of AdamLallana's problem (which is the point of this thread). At all. Not a concrete answer, not a speculation.

Thanks for the suggestions guys. A windows 10 reinstall seemed to fix the problem, which I needed to do for other reasons (not that it's the optimal solution

). My game is running without errors now... Except the annoying revora login bug

Again Thanks for the help guys!

Except the annoying revora login bug

What bug is that? Do you need to delete some of your buddies?

What bug is that? Do you need to delete some of your buddies?

I think he wants to tell about crash while going online.